We left Aquarius in Papeete Marina June 28th for a little more than a month while Zivile and I visited family and friends in Lithuania, San Diego, and Las Vegas. While away, Aquarius was in good hands with our friend Henry watching over her at Papeete Marina. The separation went well for all involved except for Zivile. She picked up some type of bug (or whatever) in Lithuania which required her to visit to Urgent Care in Las Vegas, followed by several visits with doctors in Tahiti. There was a possibility that Zivile would require surgery, but in the end the doctors in Tahiti prescribed 6 weeks of 3 different antibiotics. Zivile continues to take her medications, and luckily for us they seem to be working.

Zivile was in bed on Aquarius most of August, but lately she has ventured out. Aquarius was in the Papeete Marina for the first 2 weeks August while Zivile was under the care of local medical doctors, and I gave Aquarius some much needed TLC. Finally on August 15th we were able to complete the short 5 hour sail to Moorea, and dropped the hook in Opunohu Bay. Zivile continued to get better in Moorea, and with the increased medical bills, it was nice not paying $44 per night to Papeete Marina.

We were fortunate to meet up with some sailing buddies in Opunohu Bay. We were also invited to a dinghy raft-up concert. YES, you read it correctly! OMG, what a blast. About 10 boats tied up their dinghies to the back of Steve and LiLi’s 48 foot Hans Christian, called Liward, and while Steve and a few guest musicians entertained us, LiLi jumped from dinghy to dinghy talking with us guests.

One of those long tough days at anchor in Opunohu Bay, Ken and a few of the other Yachties anchored close by took an excursion to snorkel with the whales. Ken got a few videos close up and personal with local Polynesian whale population. Zivile wasn’t up to swimmin’ with the fishes, but that night she was able to get out with our new friends Henry and his lovely wife Isabelle for a traditional Tahitian dinner at a local restaurant. It was another great evening in French Polynesia, thanks Henry and Isabelle!

At 2AM on August 21, we left Moorea for the 14 hour sail to Huahine and anchored just off the dinghy dock in Fare. We had been in Fare a few months before with JP and Lony, the first owners of Aquarius, but this time sailing was much more difficult because of Zivile’s illness.

Aquarius is currently anchored in Fare Huahine, about 100 miles NorthWest of Tahiti. Zivile is getting a little better each day, and Aquarius continues to take excellent care of us!

Sailing Aquarius has released 3 videos this past month on youtube.

3. Choosing batteries for a sailing vessel.

There are links to everything on our website - www.sailingaquarius.com

Fair winds, and hope to see you all soon!

Circumnavigate with us on Aquarius

Our first weeks on Aquarius...

Circumnavigate with us on Aquarius 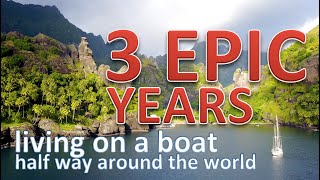 Life paradoxes (or not) ☺

Our first weeks on Aquarius...